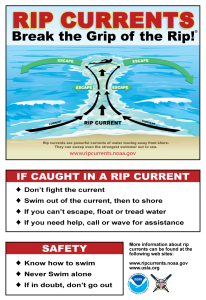 Rip currents are powerful, channeled currents of water flowing away from shore. They typically extend from the shoreline, through the surf zone, and past the line of breaking waves. Rip currents can occur at any beach with breaking waves, including the Great Lakes.

Rip currents can be killers. The United States Lifesaving Association estimates that the annual number of deaths due to rip currents on our nation’s beaches exceeds 100. Rip currents account for over 80% of rescues performed by surf beach lifeguards.

The greatest safety precaution that can be taken is to recognize the danger of rip currents and always remember to swim at beaches with lifeguards. The United States Lifesaving Association has calculated the chance that a person will drown while attending a beach protected by USLA affiliated lifeguards at 1 in 18 million. If caught in a rip current at an unguarded beach, how you respond could make the difference between life and death.

The United States Lifesaving Association, in partnership with NOAA’s National Weather Service and National Sea Grant Program, is working together to raise awareness about the dangers of rip currents. Research is also being conducted inorder to develop and improve the ability to predict the occurrence and strength of rip currents. The goal of the awareness campaign and research is to reduce the number of rip current related fatalities.

With increasing coastal populations, rip currents will continue to be a serious hazard at surf beaches. This web site is designed to provide educational material as well as real time information about the rip current risk. The time you take to understand rip currents can help you protect yourself and your loved ones when visiting the beaches.

As waves travel from deep to shallow water, they will break near the shoreline. When waves break strongly in some locations and weakly in others, this can cause circulation cells which are seen as rip currents: narrow, fast-moving belts of water traveling offshore.

Why Rip Currents are Dangerous

Rip currents are the leading surf hazard for all beachgoers. They are particularly dangerous for weak or non-swimmers. Rip current speeds are typically 1-2 feet per second. However, speeds as high as 8 feet per second have been measured–this is faster than an Olympic swimmer can sprint! Thus, rip currents can sweep even the strongest swimmer out to sea.

Rip currents can occur at any surf beach with breaking waves, including the Great Lakes.

Rip currents can be found on many surf beaches every day. Under most tide and sea conditions the speeds are relatively slow. However, under certain wave, tide, and beach profile conditions the speeds can quickly increase to become dangerous to anyone entering the surf. The strength and speed of a rip current will likely increase as wave height and wave period increase. They are most likely to be dangerous during high surf conditions as the wave height and wave period increase.

How to Identify Rip Currents

Look for any of these clues:

None, one, or more of the above clues may indicate the presence of rip currents. Rip currents are often not readily or easily identifiable to the average beachgoer. For your safety, be aware of this major surf zone hazard. Polarized sunglasses make it easier to see the rip current clues provided above.

How to Avoid and Survive Rip Currents

A rip current is a horizontal current. Rip currents do not pull people under the water–-they pull people away from shore. Drowning deaths occur when people pulled offshore are unable to keep themselves afloat and swim to shore. This may be due to any combination of fear, panic, exhaustion, or lack of swimming skills.

In some regions rip currents are referred to by other, incorrect terms such as rip tides and undertow. We encourage exclusive use of the correct term – rip currents. Use of other terms may confuse people and negatively impact public education efforts.