In a matter of minutes, storms and other natural disasters can destroy homes and entire communities

“When you consider all of those impacted by Hurricanes Harvey, Irma, Maria, the earthquake in Mexico, the upcoming five year anniversary of Sandy. We use disasters like this unfortunately to help share information with the community to them be better prepared themselves when disaster strikes closer to home,” said Michael Bascom, emergency management coordinator of Neptune Township.

As part of National Preparedness Month, Neptune Township, Neptune City, and other local, county, state and federal organizations partnered to educate residents about protecting themselves and their families during storms and other emergencies.

“You are the help until help arrives. Until someone comes there to help you need to know what to do,” said Bascom.

“Bleeding from an artery is critical. Someone can bleed to death from an artery in as little as two to four minutes, so being able to stop the bleed with tourniquets and wound packing is the ability to save a life,” said Rosen.

Rescue workers demonstrated some of the work they do when disaster strikes.

During a demo, rescue workers simulated a car accident in which the passengers were unable to get out of the car, which was severely damaged. It required the jaws of life to save them.

“The jaws of life, as they’ve been known since the early 1970s, are hydraulic rescue tools. They are extremely powerful and they help to remove the metal from around the people trapped in the vehicle. These tools have multiple uses and can be used if someone was trapped inside a small space in their house or vehicle floating away and they’re not dependent on electricity. They can run on gasoline power, electric or battery,” said Michael Dileo, deputy emergency management coordinator of Neptune Township Special Operations.

Events like this one aren’t only for residents, first responders can benefit, too.

“You have to be on top of your game, a tragedy can strike at any time, a weather event. We have to be above board and we have to able to respond to any situation. We have to be able to have the equipment to do so,” said Edward Kirschenbaum, director of public safety with the Neptune City Police Department.

During Superstorm Sandy, floodwaters wiped out homes and businesses in this community.

Residents are urged to “know your zone.” It’s a Monmouth County Office of Emergency Management initiative in which all of the coastal communities participate and every home is assigned an evacuation zone based on storm surge projection. The assignments are noted “a” through “d,” with “a” being the most vulnerable. Folks can easily find those zones online.

“It’s good to be informed so you know what to have together and how to have an evacuation plan,” said Lindsay Eppley, Neptune Township resident.

Eppley hopes she doesn’t have to evacuate anytime soon, and still she feels better knowing she’s prepared for the next storm.

Neptune Township EMS was dispatched to a reported fall victim at a work site at Bath Avenue and Beach Avenue in the Ocean Grove section of Neptune Township.

Upon arrival, EMT’s found a male who had fallen approximately 10-12 feet from a first floor into a basement.  EMT’s accessed the patient along with MONOC paramedics, and also identified that this situation was a confined space incident.

At 11:57 AM, the Neptune Township Special Operations Rescue Team was dispatched. 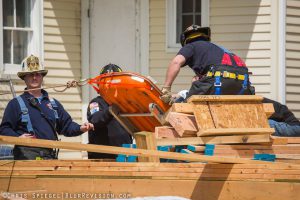 Upon arrival, Special Operations team members assessed with on-scene medical personnel and determined that the patient needed to be stabilized and removed via stokes basket.

As the patient was being packaged in the confined space, rescuers topside set up a rope haul system.  Once the patient was ready, the stokes basket was hauled up to the first floor, the stoke was detached from the rope system and the patient was transported by ambulance to Jersey Shore University Medical Center. 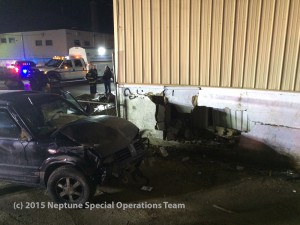